In the corner of the hall you may notice this wooden cross. 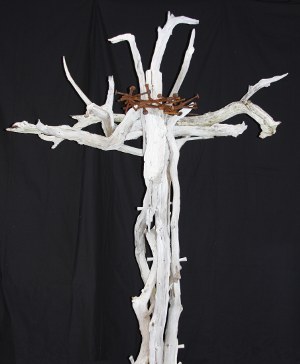 This cross was made by an artist in residence with Chester mystery plays and has now been acquired by Main Street Community Church.

We wonder what thoughts it may provoke in you?

Whilst many people have expressed appreciation of this sculpture I have to say I did not find it immediately attractive. I did find it immensely thought provoking.

First, of course, its bleakness reminds me of the horror of the cross of Jesus. The awful means of execution known as crucifixion. An appalling way to die.

Second, the shape of the sculpture hints at the shape of a body on the cross. In Roman times many criminals were crucified but Jesus Christ was not a criminal. Pontius Pilate, the Roman governor, said “I find no fault in this man.”

Thirdly, the nails are a reminder to me of the nails that were hammered through Jesus hands and feet to secure him to the cross but, in the sculpture (as many have pointed out) they take on the shape of the crown of thorns that was placed on Jesus head by tormentors. 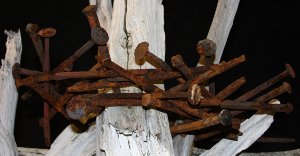 The Bible says that Jesus died on the cross for the wrongdoing of ordinary men and women like you and me.

The Bible also says Jesus is, today, “King of Kings”.

What do you think?

Written by Tim H Coad, the Church’s pastor for nine years to October 2015.