From the Diamond Isle to Cheshire

(This article was first published in the Frodsham Churches Together Newsletter, Autumn 2006)

Like a green diamond set in the blue of the Solent, the Isle of Wight rests off the coast of Hampshire accessible to mainland dwellers by high speed passenger ferries or slower car ferries. Here the pace of life slows, five miles is like twenty on the mainland, roundabouts are rare and motorways unheard of! 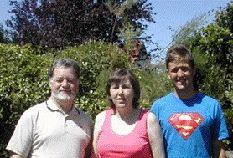 It is from this beautiful island that Tim and Eunice Coad moved in September to live in Frodsham as Tim took up the role of lead Elder with Main Street Chapel. With them came 16-year-old son Tom who is studying for his A levels. Tom is one of five siblings, his brother and three sisters live, work and study in other parts of the country. Tim and Eunice also enjoy being grandparents to their grandson and two granddaughters.

For eleven years Tim has managed ten funeral homes on the South Coast and been a leader in a country Baptist Church close to the harbour town of Yarmouth. Eunice has worked part-time in a care home joining Tim in the local church including helping with catering, arranging preachers as well as being a busy Mum! Tom has achieved GCSEs, worked as a waiter and enjoyed bathing and fishing, not to mention playing electric guitar in the church worship band!

Tim and Eunice’s life together over 32 years of marriage has taken them to Surrey, to Dorset and, after a brief stop in Kent, to Gloucestershire before moving to the Island. Tim has worked in Estate Agency and then trained at Bible College before working as Pastor of a local church. This led to travelling role with a charity, Scripture Union, teaching people about the Bible before settling on the Island and in the Funeral Profession.

Tim, Eunice and Tom believe in seeking God’s directions and plans for their lives and so are taking the step of moving to Frodsham believing that this is where God wants them to be. Excited about joining the life of Main Street Chapel, being involved in Wellspring and fitting into the community life of Frodsham, they have a vision to share the Christian faith and the love of God in a relevant manner with all who will listen. They also believe in the relevance of God’s Word, the Bible, to 21st century living and want to be involved in pastoral care, building strong Christians with an understanding of the great value God places in each individual.

It will take time to settle into Cheshire life after the diamond Isle but Tim, Eunice and Tom already feel part of Main Street Chapel, such has been the warmth of welcome given to them.