An introduction to “Lost Son” paintings by Kate Herbert in the hall at Main Street Community Church, Frodsham. 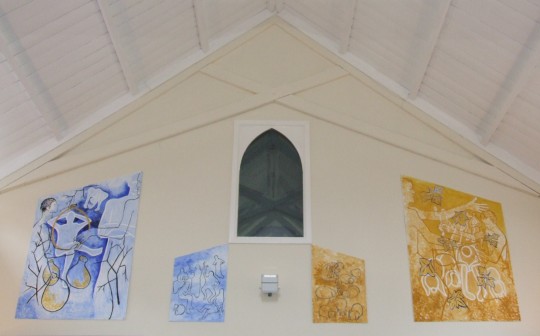 The story of the prodigal son is told in a sequence of four images. 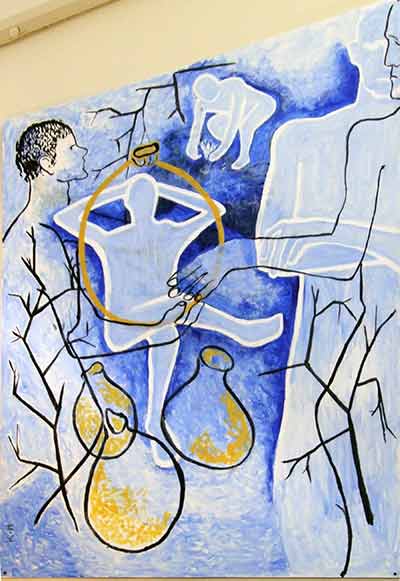 The first large blue painting needs to be read in layers. The viewer is required to look ‘through’ the work and study the pale blue figures. These show the younger son lazing in the garden whilst his elder brother works hard in the field. The larger blue figure on the right watches in despair. Parents everywhere will be able to identify with the father who wonders how he managed to produce such a lazy boy.

The next layer depicts the younger son demanding his share of the inheritance. The arrogant attitude clearly shows that he feels no shame and sees it as his right to expect his father to comply with his demands. The father graciously, though reluctantly, gives the son a bag of gold. Stormy skies and prickly bushes symbolise tragedy to come. 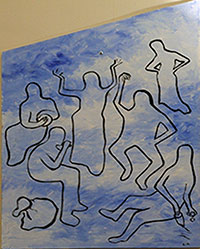 In the small blue painting, outline figures cavort decadently on the younger son’s inheritance. These are supposedly his friends who, once the money has gone, rapidly desert the boy leaving him penniless. 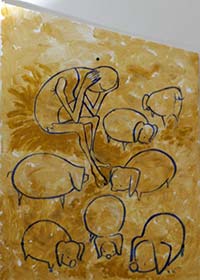 Reading across the sequence to the images on the right the small yellow ochre painting sees the prodigal son emaciated and reduced to feeding pigs. He is so hungry he would be glad to devour the husks they are eating. 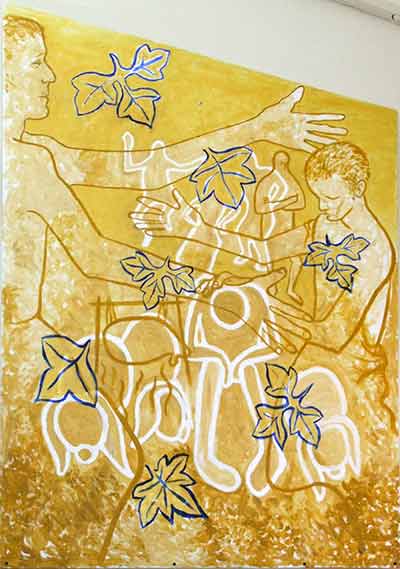 Finally, the large yellow ochre painting completes the sequence. Again the images are presented in layers. A white outline figure of the boy with the pigs dominates the background. The young man, remembering the abundance in his father’s house, sinks deeper into despair. Weak with hunger he decides to return home.

The second layer shows the prodigal son full of remorse for the trouble he has caused. In contrast to the first painting the arrogance has gone and he hangs his head in shame. But the father is delighted to see his son and runs to meet him with arms stretched wide.

The elder son is jealous when his father orders the feasting to begin.

Joy and happiness is symbolised in the third layer by the golden sky. Golden vine leaves indicate peace and love.

The Parable of the Prodigal and His Brother

‘Now his elder son was in the field; and when he came and approached the house, he heard music and dancing. He called one of the slaves and asked what was going on. He replied, “Your brother has come, and your father has killed the fatted calf, because he has got him back safe and sound.” Then he became angry and refused to go in. His father came out and began to plead with him. But he answered his father, “Listen! For all these years I have been working like a slave for you, and I have never disobeyed your command; yet you have never given me even a young goat so that I might celebrate with my friends. But when this son of yours came back, who has devoured your property with prostitutes, you killed the fatted calf for him!” Then the father said to him, “Son, you are always with me, and all that is mine is yours. But we had to celebrate and rejoice, because this brother of yours was dead and has come to life; he was lost and has been found.” ’

Kate Herbert was the maiden name of Kate Cowell who was born in Salford in 1929. In her early school years, girls were not allowed to take art classes but, during the war years, Kate’s talent was noticed and encouraged.

Awarded a scholarship at the age of 12 to Salford School of Art, Kate flourished and won several awards. Notably she met and received positive encouragement from none other than L S Lowry.

Her talents having come to notice, Kate was awarded a bursary and enabled to stay at school until she was 18 and then extend her studies to age 21, something unheard of for a girl from Salford.

At 21, Kate was elected a fellow of the Royal Society of Arts whilst exhibiting alongside Lowry in Manchester. Her career continued with a spell as a sketch artist on the Manchester Evening News. Now a mother of seven children, Kate continued to sketch and paint on family holidays, during her time as a primary school teacher and whilst teaching childcare.

After retiring in 1995, Kate continued to exhibit and between 2000 and 2002 toured Churches and Cathedrals with her exhibitions.

Kate used her artistic gift to share her deep Christian faith and conviction that the God who is portrayed by the father in the paintings longs for all men and women to return to him in faith and trust.

If you would like to know more about the God pictured by the father in this amazing story or if you identify with the son who had gone away from the father‘s home then there are trained listeners at the coffee morning at Main Street Community Church on Thursdays who would be willing to listen and talk to you. Or there are courses of study available through Main Street Community Church to teach more about Christian faith.